﻿iLoVou supports providing meals and gives back to the community one product at a time.

1 in 6 people in America face hunger and don't know where their next meal is coming from.

Hunger in the United States

Note: In 2006, the U.S. Government eliminated references to hunger in their definitions, but kept various categories of food insecurity. This did not result in any changes in what was measured. Very low food security (described prior to 2006 as “food insecurity with hunger”) means that at times throughout the year, the food intake of household members was reduced and their normal eating patterns were disrupted due to lack of money and other resources. This means that those experiencing very low food security experienced hunger–“the uneasy or painful sensation caused by want of food” (Oxford English Dictionary, 1971). For days each year, these households had to skip meals or eat smaller than typical amounts of food due to lack of funds and resources.

Poverty in the United States

The official poverty measure published by the United States Census Bureau shows that: 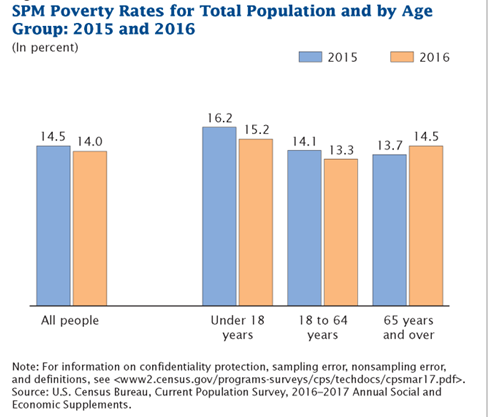 59% of food-insecure households in the 2015 survey reported that in the previous month, they had participated in one or more of the three largest federal food and nutrition assistance programs (Coleman-Jensen et al., 2017). The programs are the Supplemental Nutrition Assistance Program (SNAP), the relatively new name for the former food stamp program, the Special Supplemental Nutrition Program for Women, Infants, and Children (WIC), and the National School Lunch Program.

Three of the principal programs that provide income and other assistance for people with low incomes are the minimum wage, the Earned Income Tax Credit (EITC), and the Temporary Assistance to Needy Families (TANF) program. Other programs, not discussed here, include Medicaid and the State Children’s Health Insurance Program (SCHIP), as well as Social Security and Medicare for older people.

The AARP and AARP Foundation represent a charity which fights hunger in food insecure populations. 37 million people who are 50 years old or older have come together to address hunger through community involvement addressing anti-hunger programs, enrollment of older adults for SNAP, and research and development of sustainable solutions.

Feeding America is an extensive network of more than 200 food banks nationwide, serving 37 million including children and seniors through local partnerships such a soup kitchens, food pantries, after school programs and emergency shelters.

The Meals on Wheels Association of America is a community based program, which provides approximately 1 million meals a day to seniors across the country, either by direct delivery to homebound seniors and adults with disabilities or congregational meals at community centers or long-term care facility centers.